Manchester United slumped to a fourth defeat of the Premier League season at Old Trafford on Saturday, going down 2-0 against rival Manchester City.

Both of the game’s goals — an own goal from defender Eric Bailly, before Bernardo Silva turned in a cross on the stroke of halftime — came in the first half, piling more pressure on United manager Ole Gunnar Solskjaer.

The result sees City move up to second in the league table, while United, which has now only won one of its past six Premier League games, remains fifth.

“They played well, of course, they don’t give you opportunities to win the ball off them, so some praise has got to go to them,” Solskjaer told Sky Sports.

“But we were not at our level and standards need to be raised.” 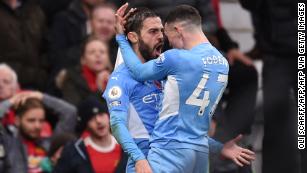 The home side’s best chance of equalizing came on 26 minutes when Cristiano Ronaldo had a powerful volley saved by Ederson, but it was City which dominated the first half as Gabriel Jesus and Cancelo had shots saved strongly by de Gea.

But the United goalkeeper couldn’t keep out Bernardo Silva’s poked effort from Cancelo’s cross just before halftime as City doubled its lead.

United introduced Jadon Sancho in the second half, which started as a more even contest than the first.

Cristiano Ronaldo had Manchester United’s only shot on target against Manchester City.

However, City’s lead never looked under threat as Pep Guardiola’s side dominated possession.

Phil Foden and John Stones both had chances to add a third goal in the final 10 minutes, but the scoreline remained 2-0 at the final whistle.

“I think we had the game of our lives today,” Foden told Sky Sports. “Everything just went right — a lot of possession and a lot of chances. We dominated from start to finish, which is obviously really good.”

United’s latest defeat in the league comes two weeks after a humiliating 5-0 thumping by Liverpool, after which came a 3-0 victory against Tottenham Hotspur and a salvaged 2-2 draw against Atalanta in the Champions League.

But despite recent results, Solskjaer said he didn’t feel like he was on borrowed time as United’s manager.

“I have good communication all the time with the club that’s very upfront and honest about the situation,” he added.