AUGUSTA, Ga. – The Land of the Rising Sun might not sleep for a week.

Hideki Matsuyama quenched the thirst of a golf-crazed nation on Sunday by polishing off a wondrous weekend at Augusta National Golf Club to become the first Masters champion from Japan.

Playing in his 10th Masters and shouldering the hopes of a nation yearning for one of their countrymen to finally win a major championship, Matsuyama seized control with a 7-under-par 65 in the third round – the lowest score by three shots – and weathered some trying moments early in the final round and a late rush late in the day from Xander Schauffele to come home victorious by one shot.

With rounds of 69-71-65-73 in the 85th playing of the Masters, Matsuyama finished at 10 under just as Japan was getting ready to tackle a new day at 8 a.m. Monday. With the aid of defending champion Dustin Johnson, Matsuyama slipped on the green jacket eight days after Japan celebrated the victory of 17-year-old Tsubasa Kajitani in the Augusta National Women’s Amateur.

“I’m really happy,” Matsuyama said through an interpreter. “Hopefully I’ll be a pioneer with this win and many other Japanese will follow. I’m glad to be able to open the floodgates hopefully, and many more will follow me. It is thrilling so many youngsters in Japan are watching. Hopefully in five years they will be competing on a world stage.

“Hopefully youngsters who don’t play golf see this and think it’s cool. I am the first major champion and it is possible if they set their mind to it. But they will be competing against me.

“I’m excited for them and hopefully they will follow in my footsteps.”

En route to completing the Japan Double on a breezy, bright final day, Matsuyama displayed his usual supreme ball-striking talents and an unfamiliar level of putting prowess, the flat stick being a nemesis of his for years. One of his biggest putts of the week came on the fifth hole in the final round when he made a 17-footer for par to maintain at the time a 3-shot edge. He won by making a 2-footer for bogey on the final hole when he had a shot to play with.

Armed with a 4-shot lead after 54 holes, Matsuyama drove his opening tee shot deep into the Georgia Pines and bogeyed the first hole. Before he teed off on the second, his lead was down to one. But Matsuyama didn’t buckle as he birdied the second and then assumed a 5-shot lead with back-to-back birdies on the 8th and 9th holes as his challengers didn’t come charging. He led by six with eight to play and then withstood the outburst by playing partner Schauffele, who finished in a tie for second in the 2019 Masters.

Schauffele had fallen seven shots back after a slow start but took to the 16th tee down just two after making four consecutive birdies. But he pulled his 8-iron into the pond and made a disastrous triple-bogey 6.

Matsuyama, who moved to No. 14 in the official world rankings, found the water behind the 15th green and made bogey and then bogeyed the 16th to see his lead shrink to two as Will Zalatoris, who captivated onlookers all week as he tried to become the first rookie to win the Masters since Fuzzy Zoeller in 1979, closed with a 70 to finish at 9 under.

“With Xander having momentum, I felt I needed to birdie the 15th,” Matsuyama said. “But it didn’t happen. But I still had the lead.”

And then he busted two perfect drives on the difficult finishing holes and made his lead stand all the way to Butler Cabin.

Zalatoris finished second and now has 10 top-10s in 22 starts since winning the TPC Colorado Championship at Heron Lakes on the Korn Ferry Tour last July.

A rejuvenated Jordan Spieth, the 2015 Masters champion, finished third at 7 under with a closing 70, joined there by Schauffele, who closed with a 72. It was Spieth’s fifth top-4 finish in his last eight starts, including his win last week in the Valero Texas Open.

“I just didn’t have a great start. Then it was just kind of the story of the week. I hit some good putts, burned a lot of lips, certainly struck the ball well enough to win the golf tournament, and they just didn’t go in,” Spieth said. “I’m tired. I felt some mental fatigue for sure and made a couple bonehead mistakes over the weekend, just from maybe the long stretch. But all in all, certainly another good finish here.”

For Schauffele, he now has finished runner-up eight times and tied for third three times since he won his most recent of four PGA Tour titles in the 2019 Sentry Tournament of Champions.

“I never gave up,” Schauffele said. “It was pretty wild, I’d say. Kind of a weird start. It almost took the edge off. I fought hard. I felt like I made it exciting at the end, hit a really good shot on 16. I committed to it. I hit a perfect shot. We thought it was down left to right. It was not down left to right, and the rest is history.

“It’s another lesson to put in the memory bank.” 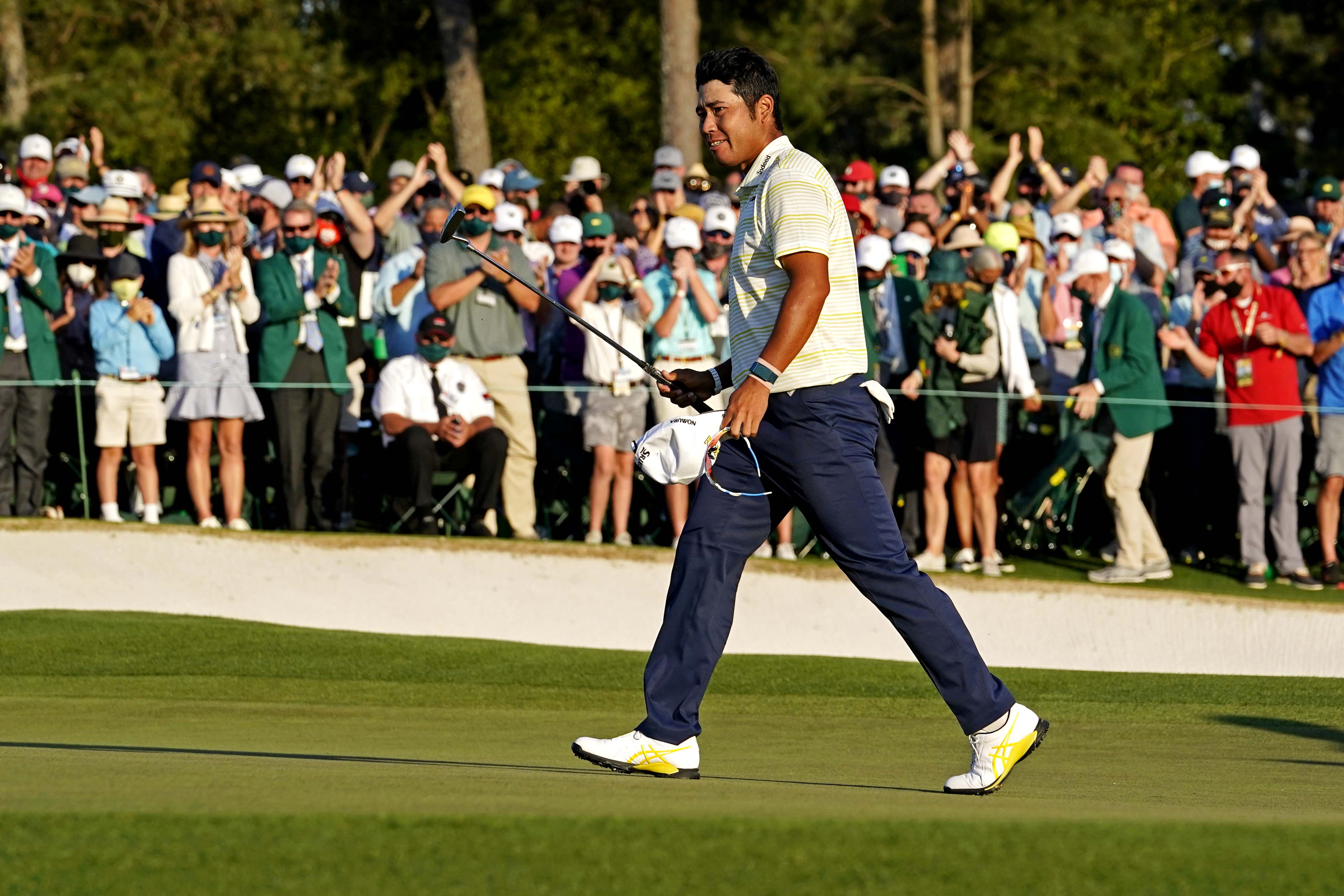 Jon Rahm, who became a father for the first time six days before Thursday’s first round, shot 66 – the low round of the day – to finish at 6 under in a tie for fifth with Marc Leishman, who shot 73.

Ten years ago, Matsuyama, 29, played in his first Masters and earned the low amateur medal. His star continued to ascend in Japan and around the world as he won five of his 15 worldwide titles on the PGA Tour and reached No. 2 in the world before he blew out 26 candles on his birthday cake.

He did so by rarely going anywhere at any tournament without a gaggle of reporters documenting every step, swing and word for a nation of 130 million who love their sports stars, nearly 10 million who play golf. There are 2,500 golf courses and hundreds of high-tech driving ranges throughout Japan.

Thus, at many tournaments, Matsuyama had a larger media following than Tiger Woods, the two dozen Japan media talking to him every day at every tournament. In 2016, 2013 Masters champion Adam Scott convinced Matsuyama to play in the Japan Open. The two were paired with another Japanese star, Ryo Ishikawa, in the first two rounds and Scott was reminded of the wild, wonderful and very crowded time he was paired with Woods and Phil Mickelson in the first two rounds of the 2008 U.S. Open at Torrey Pines.

“(Matsuyama) is a bit like a Tiger Woods to the rest of the world in Japan,” Scott said. “The crowds in Japan are fanatical is the best way I can describe them. It makes for an incredibly fun energy to play golf in front of. They love the game, and they love the superstars going over there. I remember I took the green jacket over there in ’13 when I went, and it was an incredible response I got, so I can only imagine what Hideki will experience.”

This week at Augusta National, however, was a breeze for Matsuyama. The COVID-19 global pandemic severely cut into the ranks of the traveling circus and there were just a handful of Japanese media on site this week. Not surprisingly, Matsuyama was much more relaxed.

“Being in front of the media is still difficult. It’s not my favorite thing to do, to stand and answer questions,” he said through his interpreter. “It’s been a lot less stress for me. I’ve enjoyed this week.”

He will enjoy going home to Japan.

“I can’t imagine what it will be like,” he said. “What a thrill and an honor it will be for me to take the green jacket home. I’m really looking forward to it.”

Louis Oosthuizen will not be inconsolable, but he will certainly take heart after his third-place finish in the Open Championship […]